Papa Rabbit Hits The Big Time – by DARYL – A Review

There is not stronger magic than something that happens in the spectators hands! Daryl’s timeless 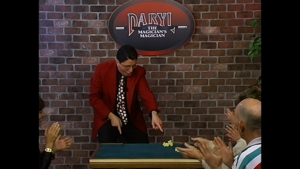 sponge routine is perfect for ALL venues! The fun begins when a sponge rabbit and a little bird are magically produced. A super-clean and baffling transposition is performed between the rabbit and the bird followed by a hilarious comedy routine that will get your audience on their feet!!

Mama rabbits and Papa rabbits appear and disappear in the hands of both the magician and the spectator in this beautifully thought out routine and story. At each step the audience is caught off guard. For an unforgettable finish, a large handful of baby bunnies magically appear in the spectator’s tightly clenched fist! Comes with everything you need to get started today!

You can’t beat a classic. Daryl’s classic Papa Rabbit routine is truly a thing of beauty.. It is magic at its most basic and entertaining level. I don’t care what you think of sponge bunnies, or silks, or linking rings.. or any of the tried and true tricks that have served as the framework for many a magicians. Yes, it’s easy to mess up any of the above.. but if you take Daryl’s sponge bunny effect, combine it with a hilarious routine he honed through years of hard work, and add the crafted bunny and bird sponges he created just for this effect… you have several minutes of a super routine it would take you years to develop on your own. Honestly…

It’s unusual for the manufacturer to encourage you to use someone’s word for word script.. But.. with Daryl’s untimely passing, Murphy’s has decided one of the best ways of honoring him is to republish several of his most popular effects and sell them at a fair price. Papa Rabbit Hits The Big Time is, I think, the third special reissue I’ve reviewed… and this is one of my two favorites because it can be performed anywhere, at anytime, and without preparation.

Not only do you get all the rabbits and birds (sponges) you’ll need, but you get a box to keep them in and, most importantly.. forty minutes of instruction from Daryl and Javier Fuenmayor.. with both giving their thoughts and secrets. Daryl performs his full routine for you to see the entire effect from start to finish.. and then offers his special take. I sure do miss Daryl…

” Mama rabbits and Papa rabbits appear and disappear in the hands of both the magician and the spectator..” I don’t have to tell you of the power you instill in an effect when you can perform it in the spectator’s hand. This is a strong as it gets.. and has always been the strength of bunnies or sponge balls. Things disappear.. and reappear.. the audience laughs.. more things vanish and reappear. the audience laughs even more.. and you catch yourself laughing, even though you know what’s about to happen.

Aside from a 40 minute tutorial, the performance is, I’m sure, from one of Daryl’s L&L videos. The audience is a familiar crew from years past. Both the sound and video are what you would expect from Murphy’s Magic. No problems and no unexpected surprises in the production dept.. Thankfully, I rarely encounter a video now days that gets bad marks for production. I think the magic world has adopted a certain standard that ‘almost’ makes this paragraph unnecessary.. but… I still feel obligated to say it.

All I can say is.. spend the twenty bucks and help keep the legacy of Daryl alive while you enjoy the resurgence of a classic. Thanks to Murphy’s Magic for reissuing Papa Rabbit and for sharing it with me.. so I can share my thoughts with you.

Review by Rick Carruth for Murphy’s Magic & The Magic Roadshow