Derren Brown’s latest, and perhaps greatest, show just opened on Broadway. I have watched many of his tv specials, originating from the UK, and read several of his published works.. so.. when I was invited to attend a pre-opening show at the 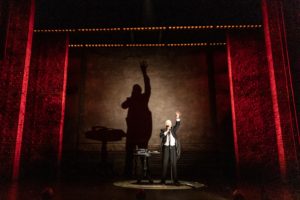 My wife and I were met at the theater by his publicist and given our press passes. Thankfully, we were seated about seven rows from the stage, so we had an excellent vantage point to watch a performer at his peak. I say that because in 2017 Derren finished a run at the Atlantic Theater Company, performing each show to a sold-out audience. This show was the same show performed in 2017, except on Broadway.. and to a much larger audience.

Written and directed by Andy Nyman and Andrew O’Connor, with writing by Derren as well, the show certainly featured a proven trio of both actors, directors, and writers. All are highly respected actors and award winners. SECRET is produced by J.J. Abrams, ( Regarding Henry, Forever Young, Armageddon, Cloverfield, Star Trek, Star Wars: The Force Awakens, and the upcoming Star Wars: The Rise of Skywalker, and Thomas Kail and Jeffrey Seller of the wildly popular ‘Hamilton’.

Derren frequently calls himself a “psychological illusionist,” and accomplishes his feats with a combination of mind reading, persuasion, and psychological illusion. He prefers to tell the audience most of what he accomplishes is through the art of muscle reading, gesture interpretation, and subliminal suggestions, among other non-psychic feats. He does not claim to be psychic.

I particularly enjoyed watching and listening to the audience as the show progressed. I could hear the whispers and profound theories. Being a fair to middling proponent of magic and mentalism, I had a distinct advantage over most of my neighbors, and yet I was thoroughly entertained throughout the show.

Derren performed a classic array of effects. A couple were effects you might be familiar with; adapted to the stage.. and a couple more were large scale effects designed for a big audience and utilizing several audience members at once. One I recognized as a card effect he changed to use with various photos of audience members.. and another segment, about 20 minutes, entailed Derren interacting with various audience members, giving mini-psychic readings, disclosing facts about their lives he couldn’t reasonably know. Everything ended with the two best effects of the night… his famous ‘drawing’ effect and a grand finale that served one surprise after another, ending with THE SURPRISE.

The audience is ‘sort of..’ sworn to secrecy.. to preserve the integrity of the show for those to follow.. so I don’t think I can be too specific. I did recognize a couple of the earlier effects in the show as being effects I had seen performed on videos. That said.. it didn’t matter. I was involved in watching how he handled the audience, how he spoke to the audience and ‘explained’ some of the supposed psychological nuiances he employed, and how he avoided ‘patter’.

The latter was important to me. It takes a special skill to make an entire show appear as if you’re performing it ‘off the cuff’.. but with special skill and handling. That is a very difficult combination.. and demonstrates a level of professionalism achievable by only a handful of performers.

What I’m saying is… Derren Brown is one of those performers. He is a pro is every sense of the word. And his show is as good as any mentalism type show you will ever attend. If you’re like me.. you missed the Beatles, Jimi Hendrix, Dunninger, Scarne and Harry Blackstone… Do yourself a favor and DON’T miss Derren Brown..