From the spells of Harry Potter to the special effects makeovers of Face Off, modern magic comes in many forms. When it comes to actual magicians 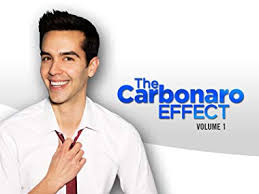 performing tricks and illusions, the spectrum is just as great. We have large-scale performers like Criss Angel and David Copperfield performing incredible feats of seeming impossibility to the lower-key sleight of hand that takes just as much skill and coordination. Airing for the first time on April 1, 2014, The Carbonaro Effect focuses on this latter style of magic, with its close-up tricks taking place in everyday scenarios like the supermarket or mall. Inspired by the Candid Camera hidden camera show, The Carbonaro Effect takes the concept even further with elaborate pranks that even fool viewers at home.

In the first episode, host Michael Carbonaro pretends to be a phone tech who pulls an actual bug out of a customer’s broken phone. He also fools bar patrons with a never-ending bottle of beer as well as convincing a set of office co-workers that he’s able to freeze and bring animals back to life. But it’s not just the tricks on The Carbonaro Effect that are magical — watching the amazement spread across participants’ faces as the trick unfolds and the eventual joy when the illusion has been revealed is a special magic all its own. And now, with dozens of episodes and hundreds of tricks under its belt, we have to ask: How does The Carbonaro Effect do what it does? Let’s stick our hand into this top hat and see what emerges. ( BY SEZIN KOEHLER )