By Brock Radke (contact) at the Las Vegas Sun
Chris Randall is a rare find: An entertainer performing nightly on the Strip who just happens to be a born-and-raised Las Vegas native. But that’s just the beginning of the story with Randall, one of the stars of “Masters of Illusion” at Bally’s, the ensemble magic spectacular based on the popular tour and TV series of the same name.. 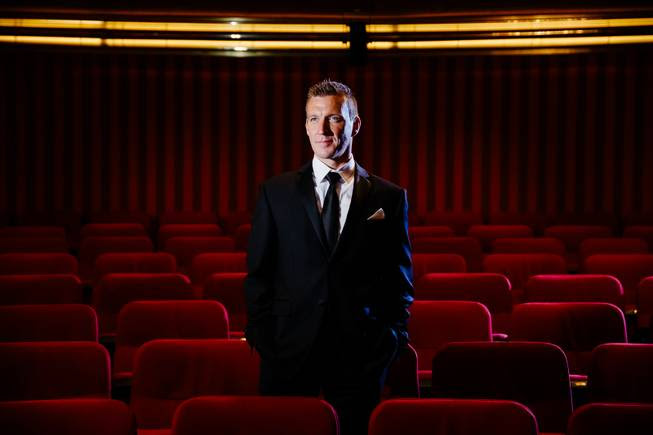 He truly grew up Vegas-style, sneaking into magic and production shows as a teen and finding inspiration before graduating from Las Vegas Academy and temporarily working at the box office at the very same theater where he now performs six nights a week. Randall has traveled the world working on different shows and perfecting his own act, and reinvented himself several times over in the process from assistant to street performer to acclaimed and awarded magician.
Randall leaves Las Vegas for Busan, South Korea, to compete in the World Championships of Magic, something he’s been working toward for the better part of the last decade. “This has kept me so laser-focused,” he says. “Even my sleep right now is like, meditation. For the last three years of my life I haven’t been able to do anything that isn’t involved with these eight minutes.”
I sat down at the Jubilee Theater with Randall to get the full story on the ups and downs of his career and his love for Las Vegas and the ever-changing world of magic.
On the World Championships of Magic: “It happens every three years, kind of like the Olympics, and this is the 27th time it’s happened. It’s usually in a European country and this is the third time they’ve done it in Asia. There are 150 magicians selected from six continents and each continent has a qualifier; ours was last summer in Louisville because that’s Lance Burton’s hometown so we got to honor him there. There were only eight Americans chosen and I’m one of only three in the stage category. Forty magicians from Korea will be attending, 30 are French, there are a ton of Chinese and Japanese and America and Canada are the smallest. What’s cool is that I’m the American champion and there’s another from Asia and another from Europe and we are coming in as the frontrunners, and we all do similar acts but since we’re from different places, how we handle that act is wildly different. And we’ve all pushed each other really hard. It’s kind of amazing because we are at each other’s throats but we’re also best friends in the same way and we exchange ideas.”
On high school at Las Vegas Academy: “I rarely meet anyone who was born and raised here. I was in the first full graduating class, from freshman [year] all the way through, at LVA. One day your friend would be in school and the next day they wouldn’t be, like, what happened to those kids in science class? Oh, those three girls are in a band called 702 and they have a song on soundtrack for “The Nutty Professor.” Three Imagine Dragons went to our school. Ne-Yo went to our school, my buddy Matthew Gray Gubler on “Criminal Minds” was in my theater classes. It was pretty awesome.
On starting in magic: “Very early on my mom and dad would take me to shows and sneak me into stuff. Back then there were a lot of cocktail shows and topless shows and they wouldn’t let kids in. At the Hacienda, Redd Foxx had passed away and they need a show last second so Lance Burton went in, and me and my dad got tickets to opening night. I saw “Jubilee!” countless times, so many different acts. When I was 15 I became an assistant and started pushing boxes for them, and at LVA there were a lot of teachers who worked on the Strip and that led to internships. When the Stratosphere opened, I did card tricks for the people waiting in line to get in. And then six months out of high school, when I was working at the box office at Paris and Bally’s and doing magic on the side, I got a call to go on a world tour as an assistant, at the age of 18, and that started this whole life for me.”
On performing in “Masters of Illusion” at the historic Jubilee Theater: “I’ve been in so many Vegas shows, I thought I did everything I wanted to do in this town. But now I’m doing it in one of the few classic showrooms left. This was the largest theater in the world when [Bally’s] was the MGM Grand. They filmed parts of “Rocky 4” here and “The Incredible Burt Wonderstone” was shot here. There’s just an amazing history at this theater, and being a Vegas guy, the only culture I have is old school Vegas. My dressing room is three doors down from Wayne Newton. That’s amazing. For a kid in Las Vegas, that’s the dream.
“Continuing on with ‘Masters of Illusion’ on our tour, that’s really my future. The big thing I want people to get out of my journey is that I was almost on the street and now I’m this close to being a world champion and it was our show that saved me. They took a chance on me when nobody would touch me.”
On his unbelievable card-throwing act: “I was sitting in a Starbucks and heard Michael Bublé’s “Feeling Good” and I just saw that sequence, but I’ve been practicing that in some form since I was 11 yeas old. It was at magic camp — yes, I’m that dorky, I went to magic camp — that I discovered I could do that, just kids running around having card fights and seeing if we can launch cards like Spider-Man. That sequence is one of the hardest parts of the act because it’s a mix of [magic] and juggling, and the timing of the music, and the humidity in the air can mess up the cards or the air-conditioning can mess it up. In Korea I’ll have to worry about humidity because it’s a lot different than Vegas.”
”Masters of Illusion” is performed at 7 or 7:30 p.m. Wednesday through Monday at the Jubilee Theater at Bally’s Las Vegas (3645 Las Vegas Blvd. South, 702-777-2782) and more information can be found at caesars.com.
Story Source: CLICK HERE
Comments are closed.