(The following is a guest blog post by Marilyn Creswell, Librarian-in-Residence at the U.S. Copyright Office.)

Magicians do not always reveal their tricks, even when they register their copyright claims. The legendary Hungarian immigrant Harry Houdini registered three of his famous illusions as “playlets,” or short plays, with the U.S. Copyright Office between 1911 and 1914. The playlets were registered as dramatic compositions, which have been eligible for copyright protection since 1856. Houdini’s deposited playlet scripts are now held within the Reader’s Collection, Library of Congress Copyright Office Drama Deposits. 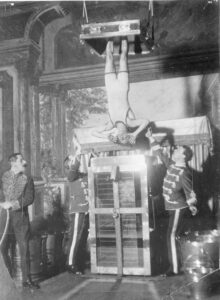 Houdini and the Water Torture Cell. From the Library of Congress Prints and Photographs Division.

Houdini’s first American copyright registration is for the playlet “Challenged: or, Houdini upside down” that features his famous Water Torture Cell trick, also known as “The Upside Down.” The trick, shown here, is an escape from a water-filled cabinet while Houdini’s ankles are in stocks and the lid is locked. The registration describes the work as a “magical dramatic playlet” in sixteen typewritten pages. The first act depicts a group of men talking about Houdini’s amazing abilities, integrity, and willingness to take on challenges. By the second act, Houdini (played by himself) accepts their challenge and, according to the script, “*HOUDINI MAKES HIS ESCAPE*” and the crowd gives “Three cheers for Houdini, Hurrah, Hurrah, Hurrah.” He kept doing the trick through his 1926 tour when the foot stock broke and he fractured his ankle.

In 1914, Houdini registered his “Walking through a Brick Wall” trick as a playlet in two scenes. The plot of this playlet involved a father who constructed a brick wall to keep the son of his “mortal enemy” from being able to look into his garden. The father states, “The day you can walk through the brick wall that separates our houses, I’ll give you my daughter.” The next day, the father wakes up to see the young man made it through the wall. To his new fiancée, he explains, “Alice, whether I did or not [walk through the brick wall], everything is fair in love and war.”

This playlet includes a note after the curtain, which explains the illusion. It reads: 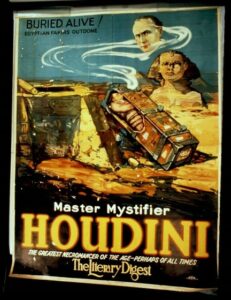 From the Library of Congress Prints and Photographs Division.

“To attain the above practical effect of walking through the brick wall, the wall proper is laid across the center of a trap door, on opening of which gives an opening in stage on both sides of wall through which the person playing the part gets from one side of wall to the other the dirt and grass mounds acting as screens for the trap.”

Soon others began selling cheap blueprints of the apparatus Houdini used to perform the trick. Even though the copyrightable words and script of Houdini’s playlet were not necessarily infringed, the act lost its appeal once its illusion’s methodology was well-understood. Houdini only performed the trick a few times, and then sanctioned his younger brother, Hardeen’s, use of the trick.

Houdini registered his last playlet, “Buried Alive,” in 1914. The premise of this play involves two tourists who try to one-up a local priest by performing a surprising “miracle.” The stage directions describe the tourist in a straitjacket, who is put into an empty box and lowered into the ground with dirt shoveled atop him. After a few chants and incantations, the tourist is revealed “relieved of his bonds, and appearing just as he was before.” The locals treat him as supernatural, but he insists he is a mere man. Houdini died on October 31, 1926, and was buried in the same custom-ordered bronze casket he used for Buried Alive.

Houdini bequeathed many of his magic tools to his younger brother, Hardeen, with instructions to burn and destroy them after Hardeen’s death. Some tools survive, some of his tricks have been figured out, and some people may have learned from Harry himself, yet other mysteries died with him. While his playlets are now in the public domain, Houdini’s magic mechanisms may remain a mystery forever.