PRESAGE: noun: A sign or warning that portends or foreshadows a future event. 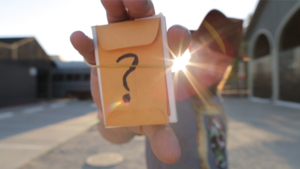 Presage is a devious tool allowing you to predict a thought of word or card. From the minds of Michael Blau & Ethan Zack, two up and comers in the magic world comes a device which can be used in a plethora of commercial & casual routines. Whether you’re a seasoned performer or a hobbyist, Presage is easy to use and guarantees a maximum reaction every time! With bonus performances and tips by Chris Ramsay and detailed explanation on the simple gimmick construction, you’ll be performing this minutes after learning the method.

No thumb writing
No switches
No sleight-of-hand required
Great for an opener or closer for strolling
Can be used to predict words, numbers, cards etc…

Be two steps ahead of your spectators at all times so you can concentrate on what matters… being a badass.

PRESAGE by Ethan Zack & Michael Blau has been around for a little while.. but it’s one of those effects that didn’t get as much press as it should in the beginning, and I think it’s time for a revisit.

First, the magi asks the spectator to name a card.. any card. When the card is named there is a comedic moment.. and the magi says “..lets just do it this way”, and thumbs or fans through the deck, asking the spectator to select another card. Once done, the selection is lost back in the deck.

There is a small coin envelope attached with a rubber band to the card box and the magi may, or may not, tell the spec this envelope will play a roll in the effect… eventually.

The magi takes the card box, which also happens to have a couple of post-it notes attached to the back side, and writes a prediction on the note. The magi asked the spec to name his card.. and turns the card box to show the identity of the spectator’s card written on the post-it.

That gets a smile. But we want more than a smile… right?

Almost as an after thought, the magi asks the spectator.. “..oh, remember that card you named when we started this effect.. What was it?”

The magi removes the coin envelope, opens it and slides out a business card/paper with the identity of the FIRST card scribbled on it.

This is when you get your REAL reaction…

A portion of the video is Chris Ramsay.. performing Presage in real time for a spectator. He emphasizes the comedy side of the performance and leaves the tutorial to Ethan and Michael.

This is an effect anyone with the know-how can perform. It does require a certain amount of setup. You’ll need an Exacto knife, a size one coin envelope (or the equivalent), a few sticky notes and a rubber band. A few minutes later.. you’ll be performing Presage.

Watching the video will give you a good idea of the handling.. and whether or not it’s for you. I will say.. it’s definitely for me. It’s easy to perform and sets your spectator up for whatever you want to perform next. Considering the cost.. $9.95.. it’s quite a fair cost.

The guys do a good job of teaching and explaining. The video quality is good, sound is good, and the total length is 23:30.

There are additional tips provided and a second method of performing Presage designed for performers with advanced skills.. as in being familiar enough with one of the primary stacks you know the position of a card after seeing the proceeding card. The only skill you need to know to perform Presage is the ability to force a card, Hindu force or otherwise.

There is a certain amount of setup.. so you cannot immediately perform this effect again. You will need about 30 seconds to yourself. Not a big deal….

Those of you who perform walk-around will enjoy performing Presage. It’s a nice cross between a bit of mental magic and an opportunity to make your spectator smile.

Reviewed by Rick Carruth for Murphy’s Magic and The Magic Roadshow.