The Vault – Revolt by Geraint Clarke – A Review

Geraint Clarke has produced a video of three cards effects. Each is similar in style, but very different by nature. Here is the ad copy: 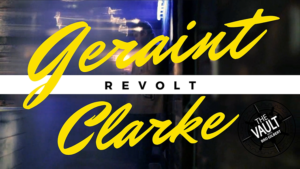 “Welsh underground superstar, Geraint Clarke, offers three brilliant playing card divinations from a shuffled deck in use. But these are far from your standard ‘pick-a-card’ trick. Each effect is more impossible than the one before, with the magician revealing the chosen card though there was no way to for him to have any idea what the card was. Each effect is diabolical, practical and most of all, potent for a lay audience. This is Revolt. Here’s what you get:

Essential: A FREELY CHOSEN card is selected at random and the spectator is then able to shuffle the card into the deck, losing it completely. The magician is able to locate the card despite these test conditions. This effect relies on a very clever principle that, once mastered, will help you create miracles in this and countless other effects. Geraint offers several ways to get into and out of the effect, and offers advice on how to handle less than optimal conditions to create the strongest effect possible.

Alter Ego: A card is chosen at random and lost in the pack. The spectator can then shuffle the cards, losing the card legitimately. The magician is able to divine the name of the card without ever having to touch the deck. The method is genius, can be set up while interacting with the audience between tricks, and has the potential to create a real moment of astonishment.

Momentum: You’ll be using this one within moments of seeing this clever method. Again, a freely chosen card is selected and replaced in the pack and can be lost in the deck. Before the cards have been handed to the spectator to be shuffled, and without turning ANY cards face up, you will instantly know the name of the selection. Momentum allows you to take a very commonplace item, one that you carry with you daily, and turn it into an impromptu gaff. Get miles ahead in your card work, creating true miracles with pasteboards. ”

I know.. three card tricks on a video aren’t going to impress anyone – quantity wise. But, REVOLT has a couple of things going for it.. One, three good effects for $6.00 IS something to get excited about.. And Two, three good effects that are thoughtful, magician foolers, are more than I’ve gotten from some double dvd sets.

Although not self working, all three effects are easy enough that a beginner can learn them, and perform them, successfully in short order.

ESSENTIAL uses a borrowed, shuffled deck. There is no setup. You ask a spectator to select any card at random, and after the card is returned to the deck and the spectator allowed to shuffle the deck, you can tell the spectator the card he picked. I appreciated the various ideas and tips Geraint offered up. Sometimes there may be a slight bit of fishing, very slight, but the wording nullifies it. The audience is non-the-wiser.

ALTER EGO uses the same premise.. a card is selected, lost in the deck, the deck thoroughly shuffled by the spectator, and the magician can name the card afterwards without touching the deck. (Except during the selection). This is as close to self working as it gets without being actually self working. You do need to conduct a little subterfuge, but it’s a natural movement and will slide by the audience.

MOMENTUM is a thoroughly modern version of an early 1900’s card technique. The method is old as the hills, but the dirty work is accomplished with a very modern tool everyone carries. Practice your handling and this will be ‘maybe’ the killer of the three. Actually, Alter Ego may be my personal favorite, because of the lack of handling, but I’m not totally sure… duh…

For six dollars.. you can’t go wrong. The video is well recorded. Sound and lighting are good. And the total length is about 23 minutes. This probably ranks as one of the best deals for the money of all the videos I’ve reviewed for Murphy’s…. and that’s a LOT of videos.