Unhanded – by JP Vallarino – A Review

Imagine being in full control of a spectator’s card, without EVER touching the cards. Impossible!? Welcome to J.P. Vallarino’s UNHANDED! 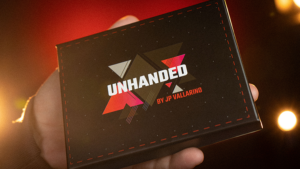 This is the ultimate card control utility – they choose, they sign, they cut, they shuffle, and they can even place the deck back into the card box to make it completely sleight-proof! You can have your back turned the entire time while sipping Pina Colada’s, and UNHANDED will control of their selected/signed card for you!

And because you never have to touch the cards, the heat is never on you. UNHANDED can be used as a super easy peek, as a devious card steal, a card penetration, a fully hands-off transpo, or a miraculous vanish! From magic to mentalism, the choice is fully up to you!

You never have to touch the cards
The spectator does all the work, yet you still have control of their card
Over 2 hours of instruction – (We couldn’t stop coming up with routines!)
Includes sleight free routines for beginners
Includes advanced routines for magicians looking to easily level up.
Use it as a card steal, card control, in mentalism, card penetration, and a super easy peek
Instant reset
The power to control their signed and selected card is now in THEIR hands! But what you do with that, is entirely up to you… This is UNHANDED!

I recently received a number of items from Murphy’s Magic for review. I was impressed by all the items, to some degree. But.. THIS item.. UNHANDED by JP Vallarino, was my favorite. My mind has been racing with the many possibilities and different ways this can be personalized by the performer to suit his style.

My goodness.. I don’t know where to begin. So… lets start with a basic performance/handling and go from there..

JP has created a utility device that allows the magi to allow his audience to perform much of the magic.. and he can still take the credit. I don’t want to say TOO much, but I want to say enough to answer your basic questions about Unhanded.

The magi, with a very slight bit of prep, can hand a deck of red Bicycles to a spectator. The spectator can then open the deck at any location and make a 100% free selection of a card.
(The magi has his back turned during the effect)
The spec then signs the card and places it face down on top of a face down deck.
The spec is then requested to cut the deck, and he can then cut it a second time or allow a fellow spec to cut it.
He then places the deck inside a red Bicycle card box.
The deck is handed to the magi, he recaps what just happened, and opens the card box.. dumping the cards back into the spectator’s hands.
The spec is asked to look through the deck and find his signed card.
He cannot find it.
The magi can then produce the signed card from any location he chooses, including a pocket, a hat, or a wallet.

This is the most basic performance, and you can expand in so many directions from there.

The basic performance is created so a beginner can perform it for friends. More advanced performances include techniques like palming and double undercuts to achieve wildly different reveals. The advanced sleights are NOT required, and are made available so the magi can perform the same basic effect, with the same props, for the same audience, at different times.

Aside from the basic handling, a second method involves the cards being dumped into a paper bag, after the ‘magic’ moment, along with the card box, and the signed card is found inside the box.

Another involves a ‘do as I do’ plot and a second, ungaffed deck.

A third effect is a sandwich effect, using a second Joker. And a fourth and fifth effect include an ACAAN effect and a card penetration effect.

This is only the tip of the iceberg.. as you will adapt effects you use in your current routines to these props. I would say ‘..the possibilities are endless’, but that’s so cliche.. although it’s sorta true…

What’s included? You receive a red Bicycle gaffed card box, a gaffed card (Joker), and approx. 2 hours and 15 minutes of video instructions. You supply a normal red Bicycle deck. Although the video may seem long.. it is full of additional handling ideas and additional effects. The basic effect is covered completely in the first 20 minutes.

The video quality and sound are typical Murphy’s Magic quality. No problems at all. You can watch everything online or download the video.. (1.93GB)

Needless to say.. I highly recommend UNHANDED, and at $34.95 it is a real bargain.

JP published a compilation of performances to Youtube.. you can watch it at: https://youtu.be/UgXqNbSA1D0

Review by Rick Carruth for Murphy’s Magic & The Magic Roadshow