By Peter Lamont and Jim Steinmeyer

Jim Steinmeyer will require little, if any, introduction to this critic’s readers, considering his renown in the magic world as one of the premiere illusion 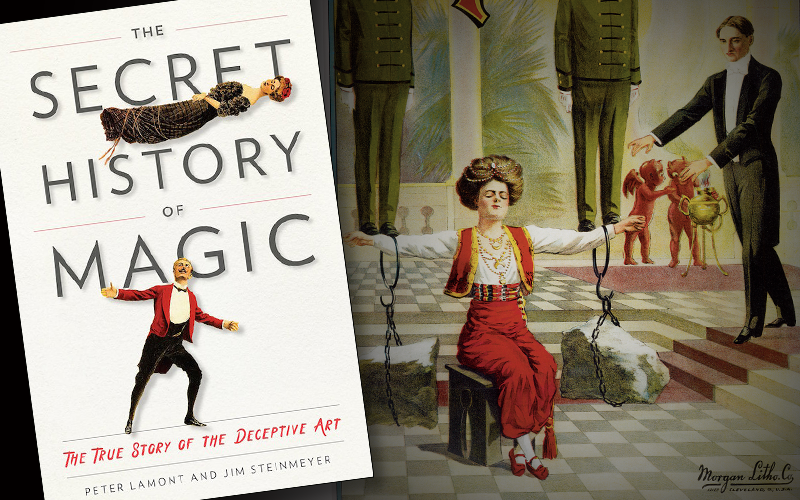 designers for magicians, theater, and theme parks, and also as the author of invaluable books about magic theory, history, tricks and illusions, for both magicians and the public. Peter Lamont, who is somewhat less widely known but no doubt familiar to many of my readers, is a Research Fellow at the University of Edinburgh, and has written extensively about magic’s history, psychology, and theory. These two accomplished authors have now collaborated for the first time, on a book for the public, entitled The Secret History of Magic.

I am a long-time fan of both writers, having reviewed a number of their books over the years for Genii. I’m particularly fond of Steinmeyer’s essay collections with Art and Artifice being a favorite, I still delight in rereading The Complete Jarrett. I frequently recommend the charming and very readable Hiding the Elephant to non-magicians who are curious to learn more about magic history and theory. From Lamont’s work, The Rise of the Indian Rope Trick is a top personal pick.

Steinmeyer’s work has been published beyond the magic world, including more obscure titles that one would not, at first blush, expect to be so widely circulated. As bystanders, we have little idea about the commercial success of such books, but it’s fair to say that Hiding the Elephant has been both reviewed and read far beyond the borders of the magic community. Kudos to anyone who contributes to raising magic’s worthy profile in the world, as art and history, in a thoughtful and substantive manner.   Read More.. https://www.magicana.com/news/blog/secret-history-magic